#CatalanWorldSBK R1. What a Saturday! Redding triumphs after a stunning comeback, Rinaldi finishes on podium and Bassani takes part to the sensational Ducati hat-trick.

Race-1 of the Catalan Round, held in wet conditions after the rain that fell late in the morning, enters by right in the history of the Aruba.it Racing -Ducati team thanks to the amazing victory of Scott Redding and the third place of Michael Rinaldi. Axel Bassani (Motocorsa) completes the hat-trick that had been missing since Race-1 at the Assen circuit in the 2012 season.

P1 – Scott Redding doesn’t get off to the best start, finding himself in 11th position after 2 laps. From lap 7, however, Scott’s race pace grows vertically and allows him to get closer to the leading group. In the last 7 laps, Redding is perfect and takes an extraordinary victory.
P3 – Michael Rinaldi makes a great start and after three corners is in third position. On lap 7 he is overtaken by Van Der Mark (BMW) and Lowes (Kawasaki). The Italian rider remains focused recovers positions and in the last lap, he tries to take the second position finishing with an exciting podium.

Scott Redding (Aruba.it Racing – Ducati #45)
“The first few laps were really difficult. From the middle of the race, though, I started to gain confidence. If I have to be honest, when I arrived close to the podium group and saw two Ducatis in front of me I thought, “I’ll take some risks but I want to win”. I’m very happy to have given this satisfaction to my team. Let’s keep on thinking race by race and then we’ll take stock at the end of the season”.

Michael Rinaldi (Aruba.it Racing – Ducati #21)
” I was really upset about the rain because my race pace in dry conditions was really positive. However, I remained focused and only thought about pushing. At the end, I tried to attack Bassani but in the last two laps, it was not easy to ride because of the water coming from his slipstream. Anyway, I am very satisfied and I hope to get another good result in the dry tomorrow”. 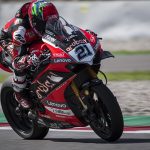 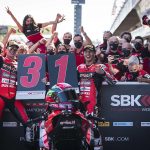 #CatalanWorldSBK Extraordinary win for Rinaldi. Redding is the protagonist of a fantastic comeback and finishes close to the second place.Press