#PRTWorldSBk Race-1. Exciting race for Redding (P2) who fights for the win until the last lap. Precious fourth place for Rinaldi

Race-1 of the Portuguese Round offers great entertainment to WorldSBK fans and ends with a significant result for the Aruba.it Racing – Ducati team: Scott Redding on the podium and a fourth place for Michael Rinaldi.

P2 – Scott Redding starts the race with extreme determination: on lap 3, with a stunning overtake, he passes both Rea (Kawasaki) and Razgatlioglu (Yamaha) on the main straight to take the lead. Following Rea’s crash, the British rider engages in a spectacular duel with Razgatlioglu, finishing second; a remarkable result for Scott Redding, who is now 34 points from the second place in the World Championship standings.

P4 – Michael Rinaldi gets off to a sensational start and recovers five positions by the first corner. His race pace is convincing and after a fight with Locatelli (Yamaha), on lap 9 he pushes the way into third place. Two laps later, however, in the middle of a fight with other 4 riders, he is forced to widen his trajectory in turn 1, losing contact with the leading group. Rinaldi remains focused and finishes in fourth place.

Scott Redding (Aruba.it Racing – Ducati #45)
“It was a good race and if I have to be  honest I didn’t expect to have the pace to be able to fight for the win. When I took the lead I tried to create a gap and take advantage of the duel between Rea and Razgatlioglu. In the last laps the battle with Toprak was really tough. Tomorrow I’ll try to stay up front again and be more aggressive to take the win”.

Michael Ruben Rinaldi (Aruba.it Racing – Ducati #21)
“It was a very close race. I’m a little disappointed because we could have been fighting for third position but to avoid contact with another rider I had to go wide, losing three seconds. Anyway, we had the pace to be on the podium and I am satisfied with that. Tomorrow we will have to make another small step to stay with the podium group”. 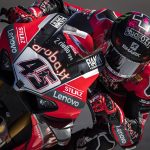 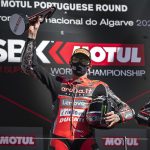 #PRTWorldSBK Redding always on podium (P2) in SPR and Race-2. Generous P7 for Rinaldi who grits his teeth after a scary crash in the morningPress