#PRTWorldSBK Redding always on podium (P2) in SPR and Race-2. Generous P7 for Rinaldi who grits his teeth after a scary crash in the morning

The Portuguese Round concludes positively for the Aruba.it Racing – Ducati team thanks to the solidity of Scott Redding, who ends the weekend always on podium, and the determination of Michael Ruben Rinaldi, who after a frightening high-side in the wet Superpole Race, grits his teeth and fights back in Race-2, finishing seventh and earning valuable championship points.

P2 – Scott Redding is the protagonist of a spectacular battle with Razgatlioglu (Yamaha) and Rea (Kawasaki). After the Irish rider crash, Redding attacks Razgatlioglu for the win but finishes second.

DNF – After an incisive start, Michael Rinaldi sticks to the podium group but crashes on lap 2. Transported to the Medical Center, the Italian rider was declared “Fit To Race” for Race-2.

P2 –  Once again Scott Redding gets off to the best possible start and takes the lead. The battle with Razgatlioglu and Rea is fierce until the Turkish rider crash on lap 11. Thanks to three P2 over the weekend, Redding has reduced the gap to both second place (-30 points) and to the top of the World Championship standings (-54).

P7 – Michael Rinaldi is not at his 100% after the crash in Superpole Race. Despite the strong pain on his right ankle, the Italian riders grits his teeth and fights with determination first with Bautista (Honda) and then with Baz (Ducati); in the end, he finishes the race in seventh position, gaining overall 3 points on Locatelli (Yamaha),  his direct rival for the fourth place in the Championship.

Scott Redding (Aruba.it Racing – Ducati #45)
“It’s been a positive weekend, during which we have been able to improve in terms of feeling. In Race 2 I tried to stay with Rea but his pace was better than mine also due to the strong wind, which is always a big obstacle for me. Anyway, I am very satisfied with what we have done. I will continue to fight, race after race”.

Michael Ruben Rinaldi (Aruba.it Racing – Ducati #21)
“It was a really tough Sunday. I got a good start in the Superpole Race, the feeling was positive but I crashed without making a particular mistake. I tried to give my best in Race 2, resisting the pain that was obviously strong; I eventually brought home some precious points. I would like to thank the Clinica Mobile and the Medical Centre for the care they gave me”. 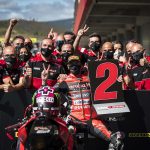 #PRTWorldSBk Race-1. Exciting race for Redding (P2) who fights for the win until the last lap. Precious fourth place for RinaldiPress 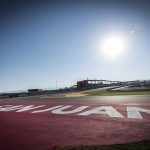 #ARGWorldSBK The Aruba.it Racing – Ducati Team returns to Argentina for the twelfth round of the 2021 WorldSBK season.Press