Bautista fights for the victory until the very last corner. Rinaldi crashes after a great comeback (from P12 to P5). Second podium in a row for Bulega (P3) in WorldSSP

An intense race for Alvaro Bautista: he recovers positions getting to the first, finishing with a precious second place.

Michael Rinaldi is the protagonist of an exciting comeback but he crashes with 7 laps to go.

These were the two faces of the Aruba.it Racing – Ducati team on Saturday’s Dutch Round, the second round of the 2022 WorldSBK season.

A rather difficult qualifying session put at disadvantage Alvaro Bautista who started the race from the fifth position. Nevertheless, Alvaro Bautista took 10 laps to pass Locatelli (Yamaha) and Lowes (Kawasaki), entering the fight for the top spot.
On lap 16 he attacked Razgatlioglu (Yamaha) before engaging in a duel with Rea (Kawasaki). The Spanish rider was able to take the lead but Rea’s response was immediate. Bautista took the chequered flag with a valuable second place.

After a convincing first time attack, Michael Rinaldi crashed on the second lap of the Superpole and he had to settle for 12th place on the grid. However, his race start was extraordinary and allowed him to turn sixth at the first corner. Rinaldi pushed his way into the fifth position on lap 12, but he crashed a few laps later and was forced to pit.

Alvaro Bautista (Aruba.it Racing – Ducati #19)
“If have to be honest, I really enjoyed myself today. Starting from the second row wasn’t easy because I had to fight with some riders before I could get to the podium group. The battle with Toprak first and then Jonny was really good. I tried to attack Jonny, but in the end I also thought about not risking Toprak’s attack. I’m very happy”.

Michael Rinaldi (Aruba.it Racing – Ducati #21)
“It was a difficult Saturday. We had a problem in FP3 that forced us to fix the bike and in qualifying, after losing the rear, I had to drop the bike to avoid worse consequences. Anyway, I am satisfied with what I did in the race, starting very well and being able to stay with Alvaro for many laps. I tried to push and I crashed but the feeling with the bike wasn’t the same when the tyres went down. We have to solve this problem”.

After securing his first front row start (P3) on the Ducati Panigale V2 in the Supersport World Championship, Nicolò Bulega finished third at the end of a race that also saw him taking the lead from lap four to seven. For the Italian rider, it is the second consecutive podium (P3) after the one in Race-2 at Aragon.

Nicolò Bulega (Aruba.it Racing WSSP Team #11)
“It’s a good result, the second consecutive podium that underlines our growth. The feeling with the bike is getting better race after race and this is the most important aspect. I would like to thank the team for the great work they are doing. The goal for this weekend was to finish twice on the podium. We will try to complete the work tomorrow”. 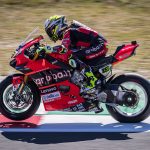 Bautista tops the first day of action of the Dutch Round in Assen. Rinaldi closes 7th. Convincing P3 for Bulega in the WorldSSP free practices.Press 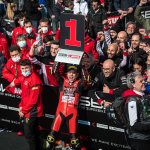 Alvaro Bautista triumphs in Race-2 of the Dutch Round. Rinaldi seventh. Bulega just off the podium in WorldSSPPress