Bautista fights for second but crashes with seven laps to go. Rinaldi finishes sixth. Bulega falls from the lead in WorldSSP Race 1

A difficult Saturday concludes for the Aruba.it Racing – Ducati team at Donington Park. Race1 of the Prosecco DOC UK Round saw Michael Rinaldi taking sixth place while Alvaro Bautista suffered his first crash of the season.

The Spanish rider got off well from the fifth position, and already in the first lap, he joined the group fighting for the podium, engaging in a spectacular duel for second with Rea (Kawasaki). With seven laps to go, Bautista managed to take a little margin, but at turn 12, he lost the front and crashed.

After a good start, Michael Rinaldi (sixth in qualifying) could not stay with the leaders. However, the race pace was incisive, allowing him to pass Lecuona (Honda) for the seventh position. Rinaldi eventually finished the race in P6.

Michael Rinaldi (Aruba.it Racing – Ducati #21)
“It’s a shame because we had the chance to stay with the group fighting for the podium until the end. Unfortunately, during the race, I had to deal with two issues that did not allow me to keep the race pace I had during practice. So I preferred to finish the race without taking unnecessary risks. Now we will analyze the data to solve the problems we had. However, I remain confident for the two races tomorrow.”

Alvaro Bautista (Aruba.it Racing – Ducati #19)
“I am very sorry for the crash, but I have to say that it was a sudden thing. The feeling was good, and I wasn’t on the limit. Unfortunately, I also made a small mistake because of the many circuit bumps, especially in that corner. These things can happen, but certainly, this fall doesn’t change my approach and doesn’t dent our confidence ahead of tomorrow’s races.”

Two starts marked the WorldSSP race following an incident that forced Race Direction to show the red flag. After making a great start and taking the lead in the first start, on the second restart, it took two laps for Nicolò Bulega to regain the lead, but the Italian rider eventually crashed at the end of the second lap at turn 11.

Nicolò Bulega (Aruba.it Racing WSSP #11)
“There is little to say: I made a mistake. I apologize to the team. I had a very good feeling, but I fell trivially. I can’t wait to get back on track tomorrow to give the whole team good satisfaction and forget about this day immediately.” 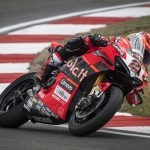 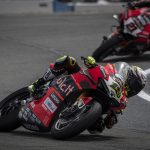