It was a positive Friday at the Donington Park circuit with the two Aruba.it Racing – Ducati team riders working hard on their Ducati Panigale V4R machines to gather useful information ahead of tomorrow and Sunday races.

After finishing third in FP1, Rinaldi ended in sixth position (1’27.735), 719 thousandths of a second off the fastest time of the day set by Rea (Kawasaki) and less than two tenths off the second place of Razgatlioglu (Yamaha).

Alvaro Bautista worked on details while also trying some tire solutions and ended both sessions in fifth position with the best time of 1’27.730.

Alvaro Bautista (Aruba.it Racing – Ducati #19)
“It was a very positive day in which we did better than we expected. It’s clear: we still have to fix some details to get closer to Rea, who at the moment seems to be one step ahead of everyone. However, I am very satisfied with the sensations I felt today and I think we have all the chances to take a step forward tomorrow morning to fight for the podium.”

Michael Rinaldi (Aruba.it Racing – Ducati #21)
“I am satisfied because we did a really good job. The feeling with the bike is good, a confirm that since Misano we have been going in the right direction. Today’s goal was not to make too many changes to the bike and the good feelings in FP1 helped us. There is still something missing to be at the top but I think we are working well.”

Very positive Friday for Nicolò Bulega, who rode the Ducati Panigale V2 for the first time at Donington Park, finishing third (1’31.164), two tenths off the best time of the day set by Aegerter (Yamaha).

Nicolò Bulega (Aruba.it Racing WSSP #11)
“I am happy with what we did today. In FP2 we managed to improve a lot the feeling with the bike. After all, this was the first time for me on this circuit with the race bike. Despite this I felt comfortable right away. The feeling is good and I think we can have a good weekend.” 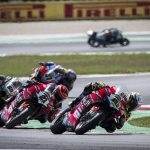 World Superbike Championship returns: the Aruba.it Racing – Ducati team at Donington Park for the fifth round of the 2022 seasonPress 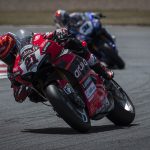 Bautista fights for second but crashes with seven laps to go. Rinaldi finishes sixth. Bulega falls from the lead in WorldSSP Race 1Press