Alvaro Bautista celebrates Ducati‘s 1000th podium in WorldSBK (212 conquered by the Aruba.it Racing – Ducati team) with a stunning victory. Michael Rinaldi‘s race is compromised at the first corner by an aggressive move by Locatelli (Yamaha) that immediately excludes him from the fight for the podium.

Starting from fourth position, Bautista turns third in the first corner and sticks with Razgatlioglu (Yamaha) and Rea (Kawasaki). The Spaniard gains confidence and on lap 10 makes a spectacular double overtake to take the lead and close with margin under the checkered flag.

After the front row (P3) gained in Superpole, Rinaldi is forced to lose 5 positions after a contact with Locatelli. The Italian rider lost ground from the leading group and found himself fighting with Lowes (Kawasaki) for seventh position, which he took with 3 laps to go.

Alvaro Bautista (Aruba.it Racing – Ducati #19)
“I am very happy with this victory. We have achieved a historic result for Ducati and to be the rider who took podium number 1000 fills me with pride. To have done it with the first place is then something exciting. I think I did a very good race, I found more and more feeling, lap by lap, and the battle between Johnny and Toprak in the early laps, if I have to be honest, helped me to stay close to them. From the middle of the race, the feeling was really positive and I tried to attack. Now, though, great concentration and all energy turned to tomorrow.”

Michael Rinaldi (Aruba.it Racing – Ducati #21)
“I’m really very upset with the way things went. After the incomprehensible maneuver, he made on the sighting lap, Locatelli pushed me out at the first corner and I had to lose several positions. From that moment it was difficult to think about recovering. It’s a real shame because the feeling was really positive. Tomorrow I will try to start even better than I did today so that I can avoid problems.” 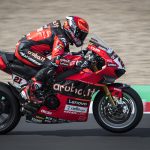 Rinaldi and Bautista third and fourth respectively in the practice for the Czech round. Bulega (P2) in great shape in WorldSSPPress 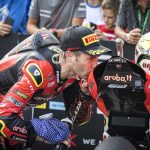 Bautista second at the end of a spectacular Race-2. A crash for Rinaldi when he was in third place. Bulega (P2) comes close to his first win in WorldSSP.Press