Fantastic win for Bautista in Race 1 of the Argentinean Round at the San Juan circuit. Rinaldi starts well and finishes fifth. Difficult WSSP race for Bulega with P11.

Starting from P3, Bautista took the lead halfway through the first lap but was forced to go wide at corner 9 to avoid contact with Razgatlioglu (Yamaha), who crashed. The Spanish rider’s comeback came between the fourth and eighth lap when he first overtook Lecuona (Honda), Rea (Kawasaki), and Bassani (Ducati) before easily defending the first position.

Rinaldi started well from the eighth position and after two laps he was already in fifth. His race pace, however, did not allow him to stay with the podium group.

P1 – Alvaro Bautista (Aruba.it Racing – Ducati #19)
“I am really very happy because the team managed to give me a very competitive bike. I want to thank them because they have done a fantastic job that has allowed me to improve my feeling a lot compared to yesterday. I was lucky in the first lap because Toprak got really close to me before he crashed. Yes, of course, it is an important victory. But I remain focused”.

P5 – Michael Rinaldi (Aruba.it Racing – Ducati #21)
“This morning the feeling was much better than yesterday even though we knew we were still missing something compared to the podium group. At the start of the race, I felt I was quite consistent but after a few laps, I started to have some difficulties. I tried not to make any mistakes to at least finish fifth. All in all a positive result, given the circumstances, but it is clear that the aim is to take a significant step forward tomorrow”.

After an incisive start, Nicolò Bulega (P11) was unable to maintain a sufficient race pace to stay with the podium group.

Nicolò Bulega (Aruba.it Racing WSSP #11)
“A quite complicated race. We are struggling a bit to be as fast as we have always been. We need to find the set-up that allowed me to go fast at the start of the season. I have great confidence in the team. 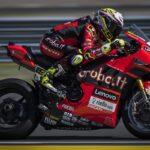 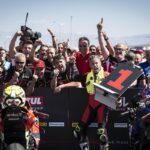 Outstanding Bautista: second place in Superpole Race before the victory in Race-2. After a superb start, Rinaldi finishes fifth. Difficult Argentinean round for Bulega: P8 in WorldSSP.Press