Free practice for the WorldSBK Argentinean round ended with Alvaro Bautista and Michael Rinaldi in third and twelfth position respectively.

It was a convincing Friday for Bautista, who worked with his team first on the set-up of the Ducati Panigale V4R and then on tire choice ahead of Race-1. After finishing fourth in FP1, in the afternoon the Spanish rider set a time of 1’37.986 that allowed him to end Friday in third position.

A rather difficult day for Michael Rinaldi who encountered some difficulties, especially in the third sector, finishing in twelfth place in the combined standings.

Alvaro Bautista (Aruba.it Racing – Ducati #19)
“It was an interesting Friday. We worked well in FP1 to understand the track conditions, which were still very good. It’s clear that having raced with Ducati on this circuit only three years ago, we needed to collect data to make comparisons. So we worked hard on the setup with positive results”.

Michael Rinaldi (Aruba.it Racing – Ducati #19)
“It was a very difficult Friday for us. I didn’t manage to find the right feeling with the bike as I had in the previous rounds. We have to analyze the data and understand which is the best direction to take ahead of tomorrow. It’s clear that I am not satisfied at all, but I remain confident”.

Nicolò Bulega and the Ducati Panigale V2 of the Aruba.it Racing WSSP team made their overall debut today at the Villicum circuit, finishing with an encouraging ninth place just, six-tenths of a second behind Aegerter (Yamaha)

Nicolò Bulega (Aruba.it Racing WSSP #11)
“All in all, things didn’t go badly on the first day at this circuit. The track is nice and I felt comfortable right from the first few laps. We worked well in FP2, improving the feeling with the bike. We have taken the right direction and I hope we can take a good step forward tomorrow.” 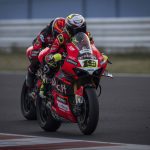 Argentinean Round kicks off, the first intercontinental round of the 2022 WorldSBK seasonPress 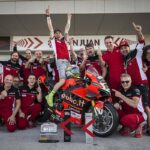 Fantastic win for Bautista in Race 1 of the Argentinean Round at the San Juan circuit. Rinaldi starts well and finishes fifth. Difficult WSSP race for Bulega with P11.Press