Fantastic win for Bautista in Race-2 at Portimao. Rinaldi (P4) always in the battle for the podium. Exciting recovery by Bulega from P30 to Top-10 finish in WorldSSP

Another extraordinary Sunday for Alvaro Bautista and the Aruba.it Racing – Ducati team. The Spaniard won an amazing Race-2 at the end of a spectacular battle with Razgatlioglu (Yamaha), while Michael Rinaldi finished in fourth place after fighting all race for the podium.

Starting from the second position on the grid obtained with the P2 in Superpole Race, Bautista chased Razgatlioglu and Rea (Kawasaki) for the first eight laps. On lap nine he made a masterpiece with a double-overtaking move that allowed him to take the lead. Razgatlioglu attacked him with three laps to go but Bautista defended himself well and finished first by a margin.

Rinaldi made the most of the second row gained in SPR and at the first corner, he was already in fourth. His pace was incisive and allowed him to stay with the podium group for more than two-thirds of the race (P4).

P1 – Alvaro Bautista (Aruba.it Racing – Ducati #19)
“A very good result. I am very happy. We encountered a few more difficulties than at the weekend in Barcelona also because we knew that Toprak and Johnny would be very strong on this circuit. As always we came with no expectations but it’s clear that I would have signed to go home with two second places finish and a win. The classification? I’ve been saying it since the start of the season: my goal is to have fun racing this bike. Then in Australia we will do the maths”.

P4 – Michael Rinaldi (Aruba.it Racing – Ducati #21)
“I am satisfied with today’s race also because we managed to overcome the problems we experienced yesterday, after having skipped FP3 completely. There’s only a little bit of regret left for the last six laps because the tyre drop was very noticeable. Compared to last year, however, on this track we have made an important step that confirms the good work we are doing”.

With a crazy comeback, Niccolò Bulega ends with a smile a weekend made impossible by the technical problem that did not allow him to take part in the Superpole. Starting last (P30) as in Race-1, in Race-2 the Aruba.it Racing WSSP team rider recovered twenty positions to finish tenth.

Nicolo Bulega (Aruba.it Racing WSSP #11)
“It’s clear that you can’t be satisfied with a Top 10. But the satisfaction remains for having made a good comeback and also for the fact that the feeling with the bike was really good. Now we go to Argentina to get back to the positions we deserve.” 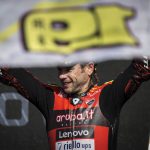 Bautista conquers valuable second place on difficult Saturday at Portimao. Rinaldi finishes in P7. Bulega makes up 17 places from last on the grid and takes the final pointPress

Argentinean Round kicks off, the first intercontinental round of the 2022 WorldSBK seasonPress