Bautista conquers valuable second place on difficult Saturday at Portimao. Rinaldi finishes in P7. Bulega makes up 17 places from last on the grid and takes the final point

By admin
8 October 2022
Everything happens on Saturday at Portimao. First a chaotic Superpole: a yellow flag cancelled the best lap to many riders, before giving back the fourth place to Bautista. Then a serious incident in the Superport 300 race caused the Superbike race to be delayed by almost two hours and to be reduced to 14 laps.

This time Alvaro Bautista is not super-brilliant at the start and finds himself in fifth position. The Spaniard battled first with Lowes (Kawasaki) and then Bassani (Ducati) to get into the slipstream of the leading pair of Rea (Kawasaki) and Razgatlioglu (Yamaha). With three laps to go Bautista overtakes Rea but then he loses a few metres: this move prevents him from attacking Razgatlioglu for the win.

Michael Rinaldi (P9 on the grid) chooses the softer tyre, which, however, does not give the hoped-for benefits. The Italian rider is unable to have an incisive race pace and he finishes in seventh position.

P2 – Alvaro Bautista (Aruba.it Racing – Ducati #19)
“It was a good race even if there is a hint of regret because I knew I was really competitive in the second half. We missed those six laps, but it’s also true that the difficult start, the battle with Bassani and the mistake to overtake Rea made me lose metres on Razgatlioglu. However, the feeling remains extremely positive ahead of tomorrow’s races”.

P7 – Michael Rinaldi (aruba.it Racing – Ducati #21)
“I’m pretty disappointed with this race. Unfortunately, we had a problem in FP3 that didn’t allow us to work. We also lost an important session to understand which was the best tyre for the race. The choice we made did not turn out to be the best one. It’s a shame because the feeling on Friday was very good. Tomorrow I definitely want to try again and stay at the front”.

Nicolò Bulega had to deal with a problem with his Ducati Panigale V2 that prevented him from taking part in Superpole. Starting from 32nd position, the Aruba.it Racing WSSP rider makes up position after position and eventually finishes 15th, gaining at least one point.

P15 – Nicolò Bulega (Aruba.it Racing WSSP #11)
“It goes without saying that the problem in qualifying heavily conditioned today’s race and it will condition tomorrow’s. I tried to push hard right from the first laps but I lost too much time to get past the first group. I will try to do better tomorrow even though it won’t be easy”. 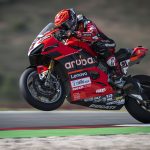 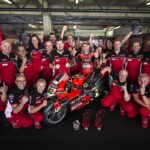 Fantastic win for Bautista in Race-2 at Portimao. Rinaldi (P4) always in the battle for the podium. Exciting recovery by Bulega from P30 to Top-10 finish in WorldSSPPress