Extremely positive free practice for Alvaro Bautista. Some difficulties for Michael Rinaldi. This is how the final race weekend of the 2022 WorldSBK season begun for the Aruba.it Racing – Ducati team.

Alvaro Bautista was immediately at ease at the Phillip Island Circuit (Australia), setting an extremely solid race pace. The Spanish rider finished second in both FP1 and FP2, also working on the new tyre solutions brought by Pirelli.

Michael Rinaldi, on the other hand, did not find the best feeling with his Ducati Panigale V4. In the afternoon the Italian rider lowered his morning time by half a second, but he was unable to get closer to the leading group.

Alvaro Bautista
P2 (1’31.232 +0.105)
“We did a good job today trying the two Pirelli tyres in FP1 and FP2 with good feeling. I am happy because the race pace is incisive. I think we have a good base ahead of the weekend’s races even though the weather conditions could mix things up starting from tomorrow. In any case, we are ready to race in any conditions”.

Michael Rinaldi
P10 (1’32.329 +1.202)
“It’s good to be back at this circuit. Unfortunately, I couldn’t find the right conditions to be able to be incisive. It was a difficult day and I am not happy with the way things went. The feeling with the bike is not right. We have to work to make an important step tomorrow. I really want to finish the season well”.

Nicolò Bulega did not lose feeling with one of his favourite tracks: in fact, he pushed the Ducati Panigale V2 of the Aruba.it Racing WSSP team well and he closed the free practice in first position.

Nicolò Bulega
P1 (1’34.027)
“I was really looking forward to coming back to Phillip Island after three years and I have to admit that the feeling was really good. As soon as I got on track I immediately started to enjoy myself and the feeling with the bike was very good. We found the speed but we will try to improve further.” 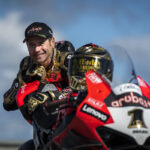 After the triumph in Indonesia, the Aruba.it Racing – Ducati team lands in Australia with other important goals to conquer.Press 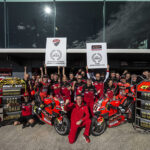