Everything happens on Saturday at Phillip Island. The rain complicates Race-1 forcing the riders to flag-to-flag. After taking Pole Position in dry conditions, Bautista finishes fifth while Rinaldi (who started from the third row) is unable to be incisive (P11). The result is enough to start the celebrations in the Aruba.it Racing – Ducati garage.
After the rider’s title was conquered in Indonesia, in fact, in Australia two other laurels come true: the Manufacturers’ Title and the Team Title.

And the celebration – that began in Indonesia with the Riders’ World Title won by Alvaro Bautista – was also enhanced today by the victory obtained by Aruba.it Racing – Ducati in the Team World Championship. It is the second success, after the one achieved in 2020, for the Team that has been representing Ducati in WorldSBK since 2015.

A “Triple Crown” in WorldSBK, the same result achieved in MotoGP to write one of the most beautiful pages in the history of the Borgo Panigale manufacturer

Luigi Dall’Igna (General Manager of Ducati Corse):
“After Alvaro Bautista’s win in the World Superbike Riders’ Title, being able to get the Constructors’ Title as well is for us an additional source of pride. It is an important goal, which repays all the efforts and the work done with great commitment, passion and dedication by the men and women of Ducati Corse. It is our eighteenth Constructors’ Title in the World Series Derivative category and it is the first one obtained with our Panigale V4R, a bike that has given us great satisfaction since 2019. As always, however, special thanks go to all the Ducati riders who were able to interpret it at their best and who, with their results, have allowed us to achieve this historic success. Congratulations also to the Aruba.it Racing – Ducati team for winning the title of best Superbike team this season”.

Serafino Foti (Team Manager Aruba.it Racing – Ducati)
“It’s been a memorable year for us. We won all the titles and this triumph fills us with joy. I would just like to say a big thank you to the whole team: without these fantastic guys none of this would have been possible. And when I say team I also mean all those who work from home and who, day after day, create the conditions for our performance to grow. Thanks also to all the sponsors who follow us so attentively and passionately. I am deeply proud to be part of this team”.

P5 Alvaro Bautista
“It was definitely a difficult race, especially because I was never able to find a feeling with the wet setting and the dry tyres. Today, however, the most important result is the one we have achieved thanks to the work we have done throughout the season. I am proud to have contributed to the constructors’ title won by Ducati and the team title, which also gives Michael and the whole team great satisfaction”.

P11 Michael Rinaldi
“I am very happy with the results we have achieved this year. Alvaro won the championship, supported by a great team. And we have shown that we are an extraordinary team. We won the constructors’ championship: this means that we have a great bike and as an Italian, I can only feel proud. I have been in the Aruba.it Racing family for years and winning the team title is a source of great satisfaction”.

Nicolò Bulega scored his ninth WorldSSP podium of the season by finishing Race 1 in third place. Starting from second position, the Italian rider’s early laps were not incisive and made him lose contact with the podium group. Bulega gritted his teeth, found confidence and pushed hard to regain third position, closing – after the crash of Caricasulo – with a precious second place.

P2 Nicolò Bulega
“I am very happy. We are back on podium after a difficult period. I could have been more incisive but I didn’t know the behaviour of the rain tyres on this track. So in the first few laps, I tried not to make any mistakes. I thank the team for the great job they have done so far. We have shown that we are fast in both dry and wet conditions. Tomorrow I want to give them all another great satisfaction” 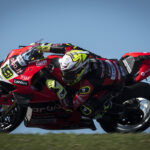 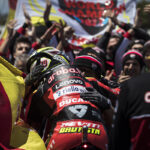 Bautista steals the show in Australia: first he triumphs in epic Superpole Race and then he wins Race 2 to wrap up ultra-successful 2022 WorldSBK seasonPress