After the stunning 1-2 set on Saturday, Chaz Davies gives another podium to the Aruba.it Racing – Ducati team by finishing second in Race-2 after fighting with Rea (Kawasaki) for the victory until the last lap. Scott Redding instead has to settle for fourth position at the end of a difficult race.

Chaz gains positions on the grid thanks to the fifth place in the Superpole Race. The Welsh rider’s start is not incisive but since the first laps, his progression is exciting. Between the fourth and the sixth lap, he attacks Redding, Bautista (Honda) and Van der Mark (Yamaha) to chase Rea. His race pace is solid and with four laps to go, he puts pressure on Rea. Chaz manages to fight for the first position then finishing second.

The second place in the Superpole Race allows Scott Redding to start from P2. The English rider tries to stay with Rea but the feeling with the rear tire is not the same it was in Race-1. Halfway through the race Scott is in fifth position and attacks Van Der Mark to close in P4 under the checkered flag.

Chaz Davies (Aruba.it Racing – Ducati)
“I’m very happy with the way things went this weekend. It is clear that the first place has another value but I am really satisfied with the work done by the team that put me in a position to be competitive since Friday. Unfortunately, the start was not the best and in the first laps, I had to fight with the group. Then I was able to lap with a good race pace and to fight with Jonny (Rea) until the last corner. We will get back on track with solid foundations next week end”.

Scott Redding (Aruba.it Racing – Ducati)
“Unfortunately I struggled a lot since the very first laps to make the rear tire work well. I was never able to find the grip that would allow me to push with the right rhythm. In the next two days, we will have to work to understand if it was a problem with the bike or just a tire that didn’t work in the best way, also because Chaz went very fast. I find it hard to accept to win race-1 and finish fourth in race-2”.

Serafino Foti (Team Manager Aruba.it Racing – Ducati)
“It is clear that after Saturday’s 1-2 we expected something more today. But all in all, we brought home a good result and valuable points that allow us to stay firmly in the fight for the Championship standings. Chaz’s race was solid even if a bad start forced him to push hard to recover without being able to handle the tires for the final attack. Scott didn’t manage to be as incisive as in Race-1 and for this reason, in the coming days, we will try to analyze the data in order to improve our performance in view of the next weekend on this track”. 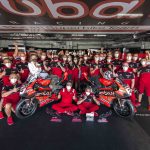 #AragonWorldSBK – Race 1. Another extraordinary one-two for the Aruba.it Racing – Ducati team: Scott Redding triumphs and returns to the top of the World Championship as Chaz Davies finishes second after a spectacular comebackPress 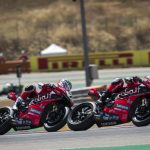 #TeruelWorldSBK. The Aruba.it Racing – Ducati Team is ready for exciting back-to-back at the Motorland circuit of Aragon (Spain)Press