Michele Pirro failed to pass the hurdle of Q1 also due to a light rain that did not let him push in the second time attack.

After a good FP3 closed in twelfth position less than two tenths from the TOP 10, Michele Pirro tried to push in the first run of Q1 but he didn’t find the ideal conditions to approach the top two places. The sensations were however positive but as soon as he re-entered the track, a light rain prevented the riders from attempting a new time attack, thus freezing the lap times recorded in the first run.

Pirro closed #SanMarinoGP qualifying in 17th position and will start from the sixth row tomorrow.

Michele Pirro (Aruba.it Racing #51)
“It was a pretty strange qualifying. I didn’t expect it to start raining so in the first run I entered the pit to change the tire a lap early. Unfortunately, then the rain came and at that point, it was no longer possible to register a good time. It’s a shame because I could have done a little better. But the level of MotoGP is very high and this is shown by the fact that I will start 17th having set a crono only 7 tenths of a second lower than the pole position. I’ll start behind but I’m still confident because the race pace is pretty good and I think I have a chance to score some points tomorrow.” 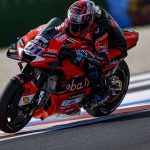 The Aruba.it Racing Team back on track at Misano with Michele Pirro in the free practices for the #SanMarinoGPPress

Michele Pirro’s race ends at the first corner. The Aruba.it Racing – Ducati team will return to the action next weekend in Magny Cours for the seventh round of the WorldSBK seasonPress