Michele Pirro’s race ends at the first corner. The Aruba.it Racing – Ducati team will return to the action next weekend in Magny Cours for the seventh round of the WorldSBK season

An unlucky Sunday for Michele Pirro in the Gran Premio di San Marino e della Riviera di Rimini. The Aruba.it Racing team rider is the protagonist of a convincing start but after recovering six positions in the first meters he is involved in a crash at the first corner and is forced to retire.

The 2022 MotoGP campaign for Aruba.it Racing ended today, an adventure born as part of the renewal of the partnership with Ducati, which the team is representing in the World Superbike championship since 2015. A partnership that will extend at least until the 2024 season.
The Aruba.it Racing – Ducati team is already ready to hit the road to France where the seventh round of the 2022 WorldSBK season will be staged next weekend at the Magny Cours circuit.

Michele Pirro (Aruba.it Racing #51)
“It’s a shame. I crashed at the first corner after a contact with Zarco. I’m sorry because I had made a good start and I could have never imagined ending a 27-lap race after a few meters. But these are the races and the important thing is that Pecco won reopening the race for the World Championship for good. I really wanted to finish differently also because I was convinced I could take some points. I thank Stefano Cecconi, Serafino Foti, and the whole Aruba.it Racing team for the support with the belief that I can do better in 2023.”

Michele Pirro’s race ends at the first corner. The Aruba.it Racing – Ducati team will return to the action next weekend in Magny Cours for the seventh round of the WorldSBK season2022-09-042022-09-04https://www.arubaracing.it/wp-content/uploads/2018/07/logo_aruba_racing.pngAruba Racing - Ducati Teamhttps://www.arubaracing.it/wp-content/uploads/2022/09/jrb9785.jpg200px200px
ARUBA.IT RACING – DUCATI 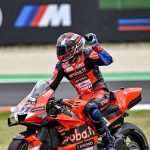 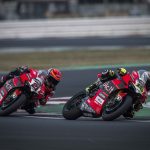 The Aruba.it Racing – Ducati team back in action at Magny Cours (France) for the WorldSBK Pirelli French RoundPress